Francis hurt during a show in Sindelfingen, Germany - 1st February 1979 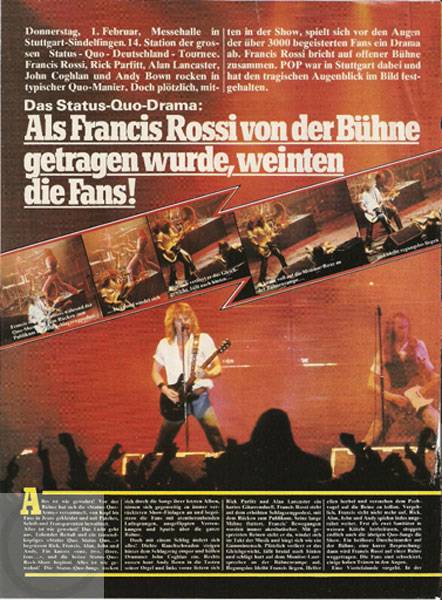 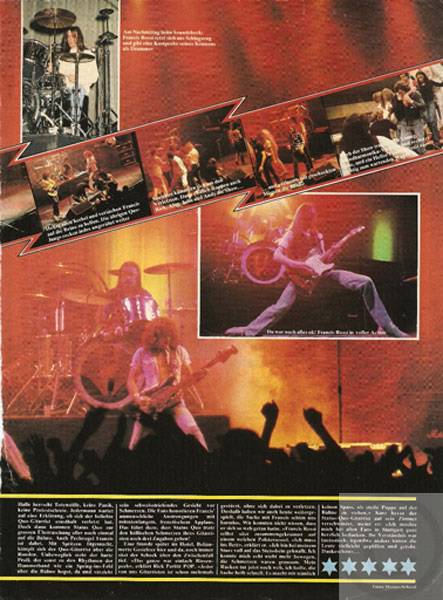 TRANSLATION:
Everything is as usual: in front of the stage the "Status Quo Army" itself, dressed from head to foot in jeans and armed with patches, scarves and transparencies. Everything is as usual! The light goes out. Raving applause and a roar of thousands of people "Status Quo, Status Quo". Rick, Francis, Alan, John and Andy appear on stage. A short "One, two, three, four"and the hot Status Quo show begins. Everything is as usual! The Status Quo Jboys are rocking through the songs of heir recent albums, push themselves mutually to more crazier show inserts and inspires the fans with breath-taking air leaps, outrageous settings and runs over the whole stage. But with an impact everything changes! Close smoke clouds climb behind the drum-kit and wrap Drummer John Coghlan. On the right outside Andy Bown strikes into the keys of his organ and left in front Rick Parfitt and Alan Lancaster are having a hard guitar duell. Francis Rossi stands on the higher podest of the drum-kit with the back to the audience. His long hair flutters. Franics `movements become even more akrobatic. With spread legs he stands there, rocks to the music and bends himself like a rubber human being. Suddenly he loses the equilibrium, falls brutally to the rear and impacts hard on the monitor loudspeaker at the stage ramp. Francis lies on the stage without any movement. Aides hurry up and try to help the "unlucky person" up on his feet. In vain. Francis does not come up. Meanwhile Rick, Alan, John and Andy continue to play. But they stopped when 2 doctors ran on stage. A terrible disorder on the stage, a short discussion: then Francis Rossi was carried away. The fans are shocked, some have tears in the eyes. One quarter of an hour passes. In prevails dead silence resounds. Everyone waits for an explanation whether the popular Quo guitarist injured itself seriously. But then Status Quo came back on the stage much to the surprise of the audience. And "unlucky person" Francis participates. With the help of syringes, the Quo guitarist fights itself over the rounds. Immovably the hard professional, who otherwise would jump to the hammer volume of the rhythm like a "jump-in-the-field , stands there and his sweatful face can't hide his pain. The fans honored Francis inhuman efforts with applause lasting several minutes. That leads to the fact that Status Quo gave three encores! One hour later in the hotel. Worried people here and there, still the shock is everywhere in all faces. " The whole thing was simply very unlucky" , explains Rick Parfitt to POP. "Everyone of us guitarists felt already several times, without injuring ourselves. Therefore we also carried on playing today, the thing with Francis seemed harmlessly to us . We couldn't know that he hurt himself so badly." Francis Rossi laid on soft chair. " I must go to bed." he explains. " I am fully slammed on the coccyx after my fall. I could not move genuinly any longer, the pain was cruel. My back is now still full of pain. I hope, the thing heal fast. It makes no fun for me, to stand on stage without moving." Before the Status Quo guitarist disappears, he means " I must thank all the fans. You are fantastic, perhaps somewhere else the people would have whistled, but not here. Thank you."